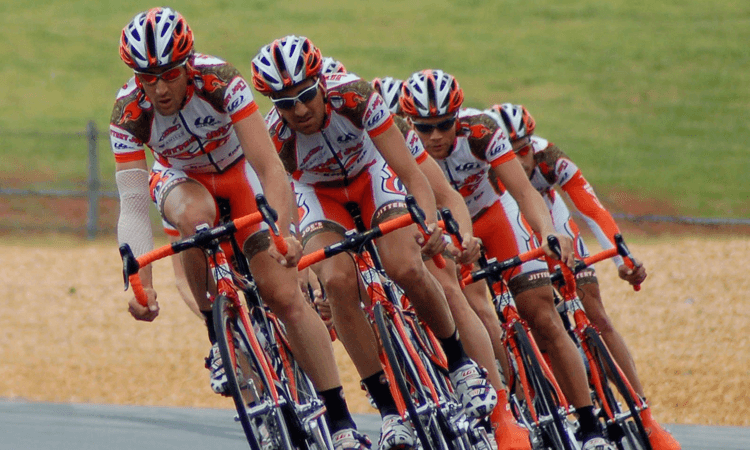 The bike leg in a triathlon has always been a time-trial, but no longer. British Triathlon made the bike legs for its qualification races for the 2016 age-group sprint world championships draft-legal, kind of like a bunch road race. It's reasonable to assume that more races will move in that direction.

There are definitely some similarities between a draft-legal triathlon bike leg and a bunch road race, but there are also some significant differences. If you’re a triathlete who is soon to compete in draft-legal races, here are a few things you should be doing in your training.

1. Start training with a group.

Start working on your group riding this winter. Don’t wait until the spring, it will be too late.

Take the aero-bars off your bike and head down to your local cycling club’s Sunday run. Find the more experienced riders, be honest about being a triathlete and ask for help learning to ride effectively in a group. Triathletes are historically unpopular on club runs, mostly because riding by themselves has not made it necessary to develop the handling skills so vital to close group riding. A willingness to learn however will win over almost all dyed in the wool cyclists and they’ll be more than happy to help you.

The rides will be quite slow in the early winter and this is a great opportunity to used to riding in a group without the pressure of having to keep up. Group riding is a skill, it makes little difference how strong you are. For tips on how to ride more effectively in a group, read this post.

2. Get some cycling-specific coaching.

Look out for opportunities to participate in cycling-specific coaching sessions, where group-riding is on the menu. Coaching is so much more than someone telling you to go for a 4-hour ride this Sunday or do 2 x 20-minute intervals on your turbo. A good coach will provide opportunities to see you and help you with your technique, be that swimming, cycling or running.

Because British Cycling qualified coaches will only coach on traffic-free facilities, you’ll have the opportunity to focus on grasping some of the intricacies of group riding without worrying about the group having to deal with traffic.

3. Include some very high intensity intervals in your training.

Contrary to popular belief, bunch racing is not easier than time-trialling, it is a different kind of hard. Time-trialling is a matter of riding at threshold, bunch racing is a series of intervals way above your threshold with recoveries below it. I have coached many cyclists to win bunch races against far stronger riders, who were mostly time-triallists, by consciously varying the pace of the race. In almost every case, the stronger rider got blown out the back of the race because they could not deal with the physiological demands of a highly variable race pace.

In order to deal with this, you need to train for the ability to repeat high intensity efforts and short recoveries for the duration of your bike ride.

4. Work on your swimming.

It’s all very well training your cycling for races that will be draft-legal, but this means nothing if you’re not out of the water in a group (ideally the first group, but at least in a group). The days of exiting the water last, by yourself and running through the field to win are over for all but the most outstanding runners (and in time, even for them). A fast-moving bike group will make it very hard for you to catch up on the bike.

Don’t spend the winter doing what you’ve always done, training to be the strongest “one pace” cyclist you can be. If you do, you’ll find that that those who work on their ability to race in a close bunch will quickly develop a big advantage over you.